Look at this healthy and strong Five Leaf Jiaogulan…

Taste the natural sweetness of this wonderful tea which is grown without pesticides or chemical fertilizers in the Highlands of Chiangmai, Thailand. It is carefully nurtured and protected from the harsh sunlight by seior villagers.    We harvest our tonifying Jiaogulan tea by hand and depending on the climatic conditions, either use traditional pan drying (during the dry season) or professional slow-oven drying at very low temperatures (during the rainy season). This makes our harvest truly the best tasting Jiaogulan. 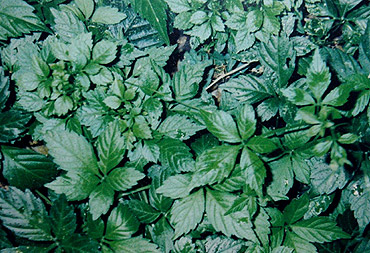 Preparation: Simply pour boiling water on it… or you can boil the teabag together with the water for a stronger tasting drink.

Jiaogulan tea sachets can be kept in your cup because this tonifying tea will not become bitter like other teas often do. Your Jiaogulan tea will become better… If it is getting too strong, you simply poor more boiling water on it.

Specially packed to save its delicate freshness in alufoil packs of 5 sachets each. Just keep an alufoil in your pocket wherever you go…

For added flavor and benefits, you can boil this Five-Leaf-Jiagoluan tea (3 minutes) together with the water.

Box of 20gr Pricing for 1 or more contact us.

Proceeds support the charity acitivties of the New Life Foundation, under the Patronage of H.R.H. The Princess Mother.

This health promoting Five Leaf Jiaogulan herb, better known as Immortality Tea by the Chinese, tastes naturally so sweet when we cut and dry it that no sugar needs to be added. It is a great anti-oxidant which has been vastly researched in China, the USA, Japan and Thailand. In these Asian countries, it is widely used as a daily “balancing” beverage because of its adaptogen qualities. Its benefits are listing improvements in heart functions, liver disease, blood pressure, bronchitis, reducing cholesterol, arteriosclerosis and strokes, and inhibiting cancer cell growth.

Jiaogulan is a powerful Adaptogen which helps your body to regulate itself and to boost its energy levels. It is rumored to be the natural replacement for Ginseng because of its easy availability and thereby its very reasonable pricing. 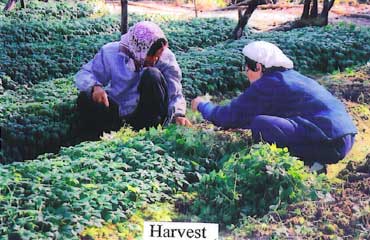 Japanese researchers discovered that the chemical components (Saponins) that make Ginseng effective are also present in Jiaogulan. While the most popular Ginseng has 28 Saponins, the most common Jiaogulan has 82 ! Studies on Ginseng, however, warn against high doses by children, pregnant women and people with high blood pressure. These issues do not exist with Jiaogulan because of its adaptogenic effects.
2. Jiaogulan Loose tea: Clear cellophane Square pack : Pricing for 1 or more contact us.

4. Organic Jiaogulan Capsules : 75mg Gypenosides per veggie (rice) capsule.
Dosage : take 2 caps two or three times per day, with ample fluids, for those days when you have a big workload, or feel a little low, or you travel or do physical workouts, or you live or work in an unhealthy environment
Packing 100 veggie capsules of 400 mg
Pricing for 1 or more contact us. 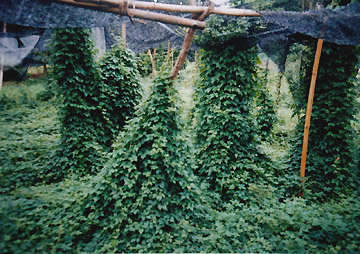 Proceeds support the charity acitivties of the New Life Foundation, under the Patronage of H.R.H. The Princess Mother.

Delivery : all orders should reach you within 10 days of order confirmation. Thai International Postal Service orders of 10kg or less are shipped by Registered Thai Airmail. Delivery time is 10 to 15 working days. By using local postal services from country to country, customs can generally be avoided, as smaller packages are considered as samples or souvenirs. UPS, DHL, FEDEX – UPS does not except dried plant products. If you already use FEDEX or DHL, we may bill your account. Please contact them directly concerning restrictions and requirements of dried plant products and tea.